Welcome to Have Kids Will Travel! This site is under construction :)
Home » Inspiration » WHAT IS THE BEST TIME TO GO TO DISNEY WORLD? 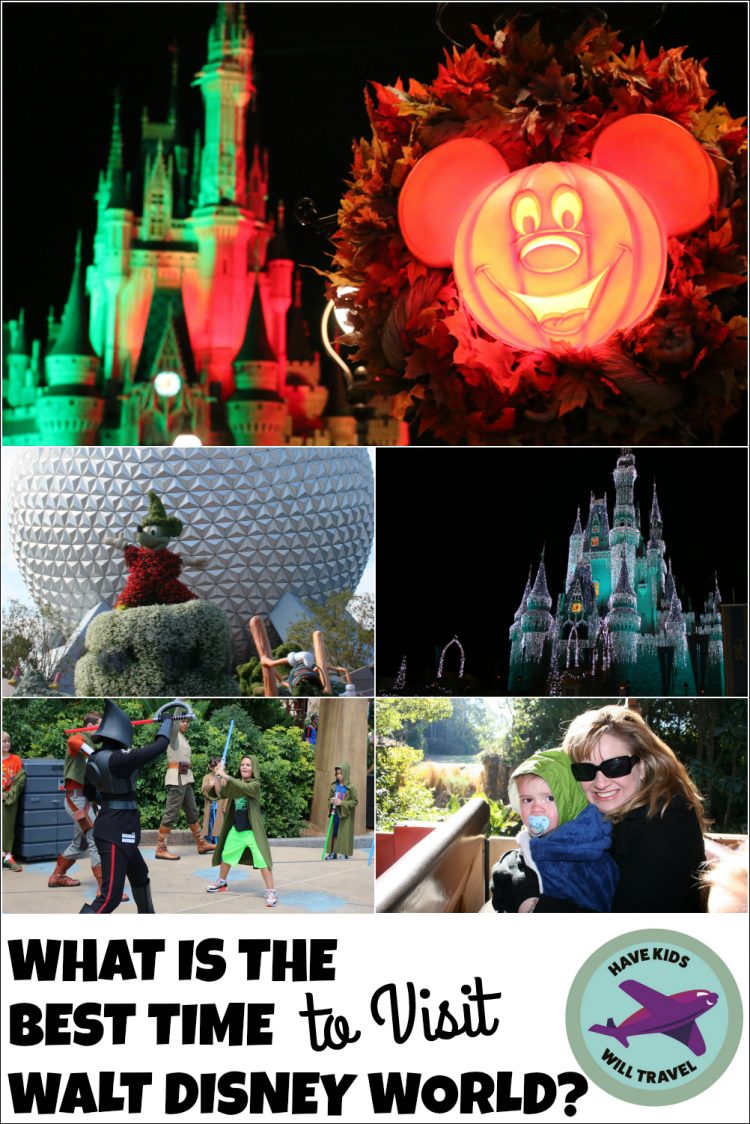 Walt Disney World is truly magical during the winter months. Of course, we start out with the Christmas holidays, and the parks and all the resorts are decorated to the nines. Mickey’s Very Merry Christmas Party runs on select nights at Magic Kingdom through to the week before Christmas. Epcot’s International Festival of the Holidays celebrates the season at Epcot until the end of December.

If you’re a runner, Walt Disney World Marathon Weekend usually takes place within the first couple of weeks of January. The Disney Princess Half Marathon Weekend is typically the last weekend in February.

December–leading up to a few days before Christmas–is pretty light. But the week between Christmas and New Year’s was the busiest days at Disney World we’ve ever experienced. One day they actually had to close the parking lot at Magic Kingdom. With that said, because we had our FastPass+ rides sorted, our days at the parks were not unpleasant. We anticipated the crazy busy-ness, so we were mentally prepared for the crowds.

The crowds tend to linger throughout the first week of January while kids are still out of school. They do pick up around the Marathon Weekend, but the remainder of January is usually pretty light save for Martin Luther King Jr. Day weekend, which is the third weekend of January.

There’s a national cheerleading competition in early February, so crowds tend to pick up for that. And from President’s Day and towards the end of the month, Disney World gets busier and stays that way through to the Princess Half Marathon Weekend.

When you think of Florida, you tend to think of hot weather and fun in the sun. But the weather in Orlando during winter can be pretty unpredictable. When we were there one early January, it was so cold that the fountains were frozen in Hollywood Studios. Once the sun came out, things warmed up a little, but coats were still necessary for a few days. So if your Disney World vacation planning includes a lot of pool time or you’re planning to include one of the beaches near Disney World, the weather during the winter months may prove disappointing.

Best Time to Go to Disney World in Winter:

If you’re cool (so to speak) with the unpredictability of the weather and want to experience some holiday magic, the best time to visit Disney World in winter is early December. Later in January and early February are also good if you avoid the Martin Luther King Jr. Day and President’s Day weekends.

Spring is quite beautiful at Walt Disney World. The Epcot International Garden & Flower Festival runs from the beginning of March until the end of May, and the Star Wars Half Marathon Weekend takes place around the third weekend in April.

The first three weeks of March and Easter break is another of the busiest times at Disney World. Most North American kids have their spring break during this time, and some combine theirs with the long weekend at Easter. Combine that with Mardi Gras and the national dance and cheer competitions taking place in March and the better weather, so this is one of the busiest times at Disney to avoid if you can.

There are a couple of cheer competitions taking place in April, and sometimes a late Easter can make April busy as well. Crowds tend to pick up for the Half Marathon Weekend but overall April is a less crowded time at Disney World.

The parks are moderately busy thought May thanks to another cheer competition, but as Canada’s Victoria Day weekend and then Memorial Day weekend approach, this is another of the busiest times at Disney World.

The Disney World weather in spring is usually quite glorious. Lots of sunshine and not too hot but plenty warm enough for swimming. Rainfall picks up during the spring months, but the rain in Florida tends to come and go in fits and starts. The rain can be quite heavy at times, but the showers are typically over quite quickly.

Best Time to Go to Disney World in Spring:

Even though it’s the time most of us get off, most of March is definitely one of the busiest times at Disney World. However, depending on where Easter falls, the last week of March or first week of April are good bets, since most official school breaks are over. Save for Easter, most of April is one of the slowest times at Disney World, as is most of May until the holiday long weekends approach towards the end of the month.

Certainly it isn’t news that Florida in the summer is HOT. But lots of places are hot in the summer and if you’re on vacation it’s definitely more tolerable. But the humidity, though! There usually isn’t much in the way of seasonal events during the summer months, although they have been opening big new attractions during the past couple of summers which can add to the crowds.

Towards the end of August, Magic Kingdom starts up Mickey’s Not-So-Scary Halloween Party on select nights. After 6:00pm the park is open for Trick-or-Treating and grown-ups can wear costumes as well. The evening parades and fireworks show are Halloween-themed, and the decorations are pretty awesome. Separate tickets are required. While August is generally one of the slowest times at Disney World, our August evening at Mickey’s Not-So-Scary Halloween Party was actually much busier than the one we attended in October. Perhaps it’s vacationers squeezing in a special event before heading home and back to school.

Save for a few days on either side of the July 4th holiday, summer is actually the least crowded time at Disney World. July is probably the busiest of the three months and the last time we were there in July there were large groups of Brazilian teenagers celebrating their quinceañeras, which doesn’t sound like a big deal except they were actually kind of disruptive and it was a big pain if you happened to end up behind them in line for a ride or in a restaurant.

Maybe I’m sounding like a broken record, but Disney World weather in summer is H.O.T. And it’s humid. There isn’t much of a breeze, either. But you are at Disney World in Florida in summer. If you can’t handle heat, choose another time. The thunderstorms can be quite intense during this time, but they are usually over quite quickly. June is Florida’s wettest month, and kicks off hurricane season which officially lasts from June to November. Because Disney World is not near the coast, even the strongest hurricanes rarely affect Disney’s opening hours. They will shut certain rides and attractions if lightning is spotted in the area.

And July is definitely the hottest of the summer months. We paid the $20 for one of the Disney fan bottles and refilled it several times–it was worth it! Our visit towards the end of August was better; it wasn’t much hotter than our home in Toronto, but definitely more fun!

Best Time to Go to Disney World in Summer:

Save for our evening at Mickey’s Not-So-Scary Halloween Party, our trip during the second-last week of August was the absolute least-crowded time at Disney World we have ever experienced. And while it is still quite hot, there was a marked difference between the heat in July vs. August. And we couldn’t get over how short the stand-by wait times were for rides that we would typically see as 90-minute waits or longer. If you’re stuck for vacationing during school breaks and your kids don’t go back until after Labor Day (like mine) I highly recommend the end of August as the best time to visit Disney World.

There is lots of fun stuff happening at Walt Disney World during the fall months. Mickey’s Not-So-Scary Halloween Party in Magic Kingdom continues on select nights throughout September, leading up to the big night itself! The Epcot International Food & Wine Festival takes place throughout September and October, finishing up about a week before American Thanksgiving in November. In that time, the Disney Wine & Dine Half Marathon Weekend takes place in early November.

The park starts to get festive in November as well. Mickey’s Very Merry Christmas Party starts up just as the International Food & Wine Festival wraps, and Holidays Around the World at Epcot starts up anew following Thanksgiving as well.

Most of fall is typically quite light, as most kids are back in school. Try to avoid mid-October around Columbus Day since the crowds always pick up around a holiday weekend. Canada celebrates Thanksgiving at the start of October, so if it overlaps close to Columbus Day that might affect the crowds.

However, it’s well-documented that the days just before and just after American Thanksgiving in November are some of the busiest times at Disney World. Steer clear if you can.

Without a doubt, Walt Disney World weather in fall is usually pretty great. Save for September, which can be quite rainy, warm sunny days are usually followed by crisp (but not too cold) evenings. Swimming is usually not a problem, temperature-wise, until you get later on in November.

It’s officially still hurricane season in Florida until the end of November. Some years are worse than others for hurricanes, but the theme parks are rarely affected unless the storm is huge.

Best Time to Go to Disney World in Fall:

Some would say that the best time to visit Disney World is in September, after Labour Day. If you’re able to pull the kids from school for a few days, it’s definitely a great time to go. Ditto for the end of October and first week or so of November, where other than the Wine & Dine Half Marathon Weekend, it’s another of the slowest times at Disney World. A bonus of going in November? You’ll see the beautiful decorations and Cinderella’s Castle lit up for the holidays. It’s truly a magical sight.

*A number of our visits to Walt Disney World were supported by Disney Parks & Resorts, but all opinions remain our own.

« Coming Soon!
WHAT TO DO ON HAVANA TOURS & DAY TRIPS WITH KIDS »

This site uses Akismet to reduce spam. Learn how your comment data is processed.

Welcome to Have Kids Will Travel! A year ago today she almost died. This was the har

For months and months I wanted to walk in a forest